The Baltic House wine bar application on Standard Quay goes before Swale Borough Council’s planning committee on 13 February. The planners are recommending approval, albeit with a clear lack of enthusiasm. They apparently cannot think of any planning grounds for refusal. It is not clear why the reasons for refusal of the restaurant application on heritage grounds are not considered to apply equally to this building – and remarks about the lack of any need for changes to the building would also appear to fly in the face of the visible evidence.

The appeal against refusal of planning permission for a restaurant in Building 1 (the large black building) at Standard Quay has been dismissed, primarily on the grounds that “harm would be caused to the character of the listed building and the conservation area” and “the loss of opportunity for continue maritime use”.

However, Swale Borough Council is criticised on the basis that it did not provide sufficient evidence for three of the four reasons given for its original refusal of the planning application (effect on vitality and viability of the town centre, maritime history and related maritime activities, and highway safety), and thus the applicant is entitled to claim partial costs.

The planning application for the Baltic House wine bar on Standard Quay has at last been made: “Change of use from office to wine bar on the ground floor and staff accommodation on first floor with no building works”. Ref SW/13/1243 for change of use and SW/13/1244 for listed building consent. Case number 01675. Not online yet (18 October). 21-day response period started yesterday, 17 October (so not actually 21 days …)

In the steering group’s latest land use recommendations, it is noted that the white building (Baltic House) “is likely to be the subject of a retrospective planning application to regularise the use with staff accommodation above” – thus setting a precedent for residential use of the Quay. The land use document seems to assume that this will be approved and is entirely relaxed about it, so long as the external appearance of this and the other quayside buildings is preserved.

The deadline for comments on the appeal against refusal of planning permission for a restaurant at Standard Quay is next Monday, 16 September. There is useful advice on how to submit a comment on the Faversham Creek Trust website.

Eric Glynn sent us this information on work done at Standard Quay since 2011. He says:
The first picture shows the stern line of a Thames Barge moored at Michael White’s newly constructed (2011) quayside between Standard Quay and Oyster Bay House. The work, which should be a minor feat of civil engineering, was done by a landscape gardener. He has since shored up the shoddy work.
The second picture shows the end wall of the northenmost shed on Standard Quay and you can see how long this piece of railway line, a support to the building, used to be, and where it has been cut off  in 2011.
The third picture shows the other large shed, which had a complete concete wall as a base. When the quay floods the water rises to within inches of the top of this wall. This shot shows where  a slice was drilled down (2011) through this wall to provide access for a trolley and ensuring that one day the shed will  flood.
Swale Planner Claire Dethier, et al ,  seemed shocked when they saw these things at a site meeting (2012) but chose to do nothing. 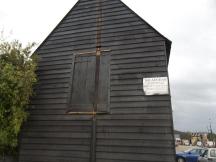 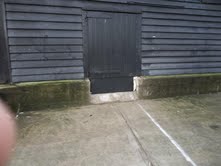 Local resident Eric Glynn has been attempting, via Freedom of Information (FOI) requests, to get a breakdown of the cost of the Neighbourhood Plan. These are the responses he’s had.

He has previously used FOI to try and get information about unauthorised works done by Michael White at Standard Quay.

In his regular Faversham Memories column for the Faversham News (6 June, p26) Arthur Percival demolishes rumours circulating (“even among folk who might be expected to know better”) that Standard Quay has never seen much shipbuilding or maintenance, except in recent times. Drawing on research by Professor Hugh Perks (“who knows more about Faversham Creek than anyone else”) he relates the histories of just some of the 94 vessels known to have been built at the Quay between 1766 and 1842. The story continues next week.

Arthur Percival talks about the refusal of the planning application for a restaurant at Faversham’s Standard Quay, and what happens next.

Standard Quay owner Michael White will appeal against Swale Borough Council’s refusal of his planning application for a restaurant, according to reports in the Faversham News and the Faversham Times (16 May). He accuses the Faversham Creek Trust of “whipping up feelings” and “intimidating councillors”, but believes that he will win on appeal, when the decision will be “back in the hands of professionals”, and says that his restaurant will “breathe new life into Faversham”. According to the Faversham News, he laughed off the very idea of compulsory purchase. He also denies that the development will have any effect on the Neighbourhood Plan.